Risk: Is This The Big One? Part II March 2018. The recent market instability is an echo of the February correction but may have further to go.
Previous
Next

The recent market instability is an echo of the February correction but may have further to go. CheckRisk believes this is another tremor, not the major earthquake we are looking to forecast in the period 2018-2020. This update explains why and what to look for in terms of a broader market collapse.

We note that, as in February, there is a risk that the current correction becomes something much bigger, as the triggers of both are on our list of major risks that are contained within our B.U.M.P (Breaking of Unconventional Monetary Policy) risk model. Namely, Currency & Trade Wars.

In February we wrote:

Followers of CheckRisk will know that we have been forecasting a severe risk event during the period 2017-2020 that implies a bear market in equities and end to the bull market in bonds and a recognition of the $72tn ($72,000,000,000,000) of new debt created since 2008 taking global debt to over 327% of GDP. So the question must be is this the event or a correction in an overbought equity and bond market.

Our base case is that this is just a correction that could be quite steep, but it does not yet appear to be the big one. However, we do recognize the possibility of things to unwind from here, and we highlight the issues to watch in the coming days for guidance.

Background to this correction:

The tech stocks in March were already looking wobbly. FaceBook and its connection to Cambridge Analytica may turn into a broader rejection of Facebook, which we have viewed as a sell for quite some time. Indeed both FaceBook and Google are under threat while Amazon is likely to get stronger in comparison as a better brand that has multiple sales avenues and unlike the former companies does not rely on advertising revenue. Amazon is, quite simply, a better business model.

But the current correction lies more in the effects of the liquidity drain that has commenced as a result of B.U.M.P. As the US Fed begins to raise interest rates it has the trickiest of tasks. The US Federal Reserve will have to avoid triggering multiple risks, which include global synchronization risks, Central Bank Policy error as well as managing inflation and GDP. The main catalyst for the current sell-off lies in another B.U.M.P. risk Currency and Trade Wars. 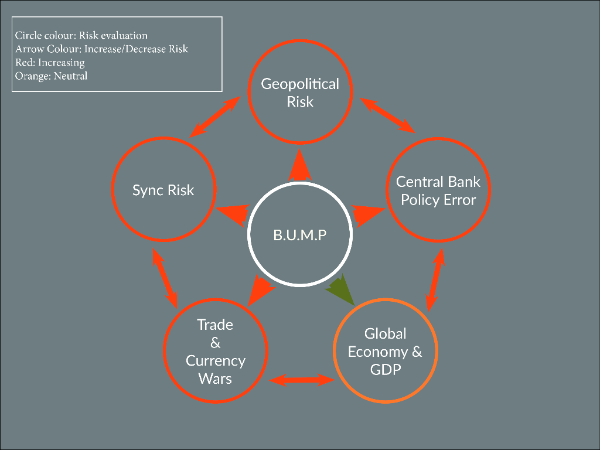 The markets have taken fright at Trumps Tariffs on Chinese steel and aluminium products. CheckRisk believes this is just a Trump tactic not the start of a global trade war, although much depends on how measured the Chinese reaction to it is.
However, nobody should be surprised at the market’s reaction to these emerging risks. They are caused by the draining of the $72tn of new debt created since 2008. The worlds financial markets have been awash with cash and easy credit so much so that any tightening of credit creates a knee-jerk reaction.

CheckRisk believes that a more serious trade war is required to trigger the collapse of bond and equity markets. It is not impossible that the status quo morphs into a larger scale battle but for the moment it appears unlikely. Trump is playing a very weak poker hand with China. The Chinese, in contrast, know precisely what cards he is holding. It is literally “threat” politics, and it has to be said, a format that Trump understands intimately. He is trying to move to the trade goalposts in favour of the USA. This is something no President in recent memory has had the courage or foolhardiness to do. It is Trump’s complete unpredictability that will keep the Chinese and others on their toes. Trade Wars are not an economic policy that can lead to success, and that Trump believes “Trade Wars are easy to win…” is deeply worrying, because trade wars are anything but that. In the meantime though if it is a strategy to improve the bargaining position of the USA, and that alone, then it might well be a really smart thing to have done, despite the risks.

Are there bigger risks?

The greater risks appear in 2019, although we are aware that there will be some challenges this year too. In 2019, the USA will enter into a natural economic, credit and inventory cycle downturn, it is long overdue. As we have said before the average recession requires at least 350bps of interest rate declines to offset the effect of the economic downturn. The current Fed Base Rate is 1.75% and so rates have to double from here to provide a margin of safety. The path to higher interest rates is set but this, of course, fires up another risk in B.U.M.P. which is Central Bank Policy Error.

As readers will know there has been a 45% increase in global indebtedness since 2008. Some $75tn (75,000,000,000,000) of new debt created. Some economic observers believe that this debt can be spirited away by a cross-matching of debt forgiveness. We do not believe this mechanism to be practical in terms of execution. The stakes are too high and the incentives of the various players are not aligned and therefore it would require lenders to be more altruistic than we believe possible. But it is NOT the overall level of debt that really concerns CheckRisk, albeit an astronomical amount. It is the mispricing of credit risk that concerns us, and the consequential knock-on effect that this risk has when it is discovered. The liquidity in bond markets is not sufficient to support that kind of price discovery. Examples of credit mispricing may be seen in the UK, Canadian and Chinese housing markets, and more importantly in the Government Bond market.

Remember that in 2008, in order to “save” the global economy, government after government took on the debts of the financial sector thus transferring risk from the private sector to the public sector, and you and me via taxes. This transfer of risk will be seen as the most serious error of the last decade when it finally unwinds. You simply cannot cure a debt crisis by creating more debt.

What is our Risk system telling us?

On a quantitative basis, CheckRisk’s Early Warning Risk System (EWRS) is picking up, especially in the USA. Currently, the risk spike is more centred on the LIBOR-OIS which may be indicating that banks are becoming more risk averse, this will have an impact on our Network Risk Matrix too.

Other short-term risk indicators are an increase in US Treasury issuance, a decline in Bank Credit and the cost of $ hedging is rising, all early-stage warning indicators. The message is that market risk is rising but NOT to levels of major concern BUT we are starting to see the impact of so-called liquidity flattening or the removal of dollar liquidity.

Please refer to the B.U.M.P schematic for an overall view of how risks are evolving. For those wanting to see our Early Warning Risk System outputs please call us and we will arrange a demo.