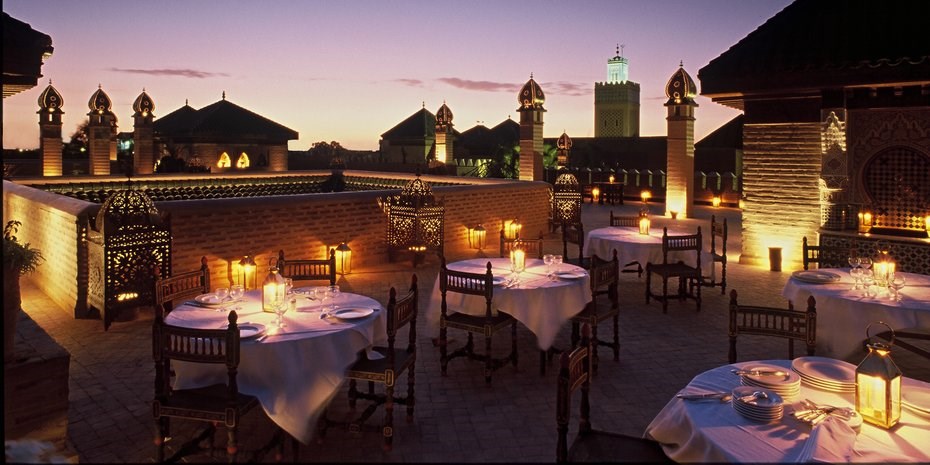 Winter Sun in Marrakech at La Sultana Hotel
Previous
Next

Marrakech, the city of endless enchantment. It’s a short hop for a weekend break if you’re based in Europe and it’s the perfect spot for completely changing your environment and your mindset alike. It’s also sunny pretty much year round and is replete with endless fascination; from the bountiful riads to the crush of the colourful souks, open markets and alleyways. It’s an incredible weekend getaway and we have to say, we recommend it earnestly.

The one piece of advice we have all else though? Get your accommodation right. It’s such an intense and crazy place, you need a retreat. After some considered research we opted for La Sultana, and we got it so, so very right.

Marrakech has an ancient history and an equally ancient people in the form of the world’s longest surviving civilisation, the Berbers. Civilisations are, of course, prone to quite significant failure as the centuries and millennia pass. Not many Carthaginians around now are there? It’s not the strongest of the species that survives, nor the most intelligent, but the most adaptable to change (to coin a phrase). It’s those civilisations that are most welcoming to outside influence that survive the longest and the Berber culture endures exactly because they are open to other traditions, welcoming in new people, ideas and practices. La Sultana is such a wonderfully perfect example of this – traditional riad architecture and features coupled with world leading hospitality from a myriad of references at every turn.

28 rooms would be a small hotel in most cities but for Marrakech, it’s positively huge. After an extensive and painstaking three year refurbishment though, this high-luxe hide away manages to squeeze this accommodation into the most intriguing of mazes where every single blink of the eye brings a new intrigue. There are very few hotels in the world with such artistic and mesmeric attention to detail jostling for your attention. Every single space – private or communal (although the whole place feels like your own private palace thanks to the privacy the structure affords) is truly special.

Arriving on a hot and sweaty afternoon we were welcomed with the ubiquitously delicious traditional mint tea and invited into the cool of the hotel. From here La Sultana managed to achieve an instant feeling of at-homeness with intense privilege which ran throughout our stay. Quite remarkable. There are 5 riads, combined to make up the hotel, each with their own “theme” – but Disneyland this is not – it’s all executed with pure authenticity, just with a very sympathetic and highly considered upgrade.

Our room, the Crocodile Suite, was positively royal, deeply comfortable and welcoming, with the sense of ancient liaison. The bathroom alone, small but oh-so-perfectly formed, was a heavenly retreat and the bed was a haven within a haven within a haven – a Russian doll of a hideaway. We ventured to the roof as the afternoon call to prayer rang out across the city and were met by delightful staff (as we were throughout the hotel) in a wide open yet solacefully inviting space and the smallest but most perfect of dipping pools to cool off in. Over our 3 day/2 night stay this was to be our base as we balanced short ventures out into the Red City with much-needed respite, peace and relaxation – a way of tackling Marrakech we highly recommend. It’s intense out there!

You can head out into the city to get lost in the souks, for the Jardin Majorelle (including the small yet fascinating Berber museum), the achingly cool Yves Saint Laurent Museum (next door to the Majorelle), dubious snake charming and delicious street food – amongst much more. However, there’s a certain magic in staying at La Sultana – because you actually feel like you’re exploring whilst staying in your hotel.

Breakfast the next morning is quite honestly world-beating, once again a perfect combination of the local and international, taking the oft-over-repeated flavours you’ll find in the celebrated tagines et al and twisting them anew into a perfect start to your day.  A singular meak that you will not forget, pretty impressive stuff for a breakfast. Lunches are light snacks (albeit pricey for what there size) by one of three pools and evening drinks as the sun sets are spectacular.  There’s little better than a chilled glass of something special after a day where your sense of adventure has been thoroughly quenched already.

La Sultana could arguably be celebrated for one thing over all else though. Their spa. After 2 days drinking, eating and exploring we had an impending flight to catch – but we had saved our spa session to the closing hours of our stay and what heaven it was. Morroco is celebrated for it’s Hammans and if you do one thing during your stay it should be to sample the delights that La Sultana has to offer. Its own Hamman experience is truly special. We took a three-hour treatment combining body scrubs, aromatherapy and a full body massage interspersed with dips in their cooling sub-terranean pool and sips of mint tea. The perfect end to a perfect weekend break a million miles away from the busy week at home.

To book you stay at La Sultana click here