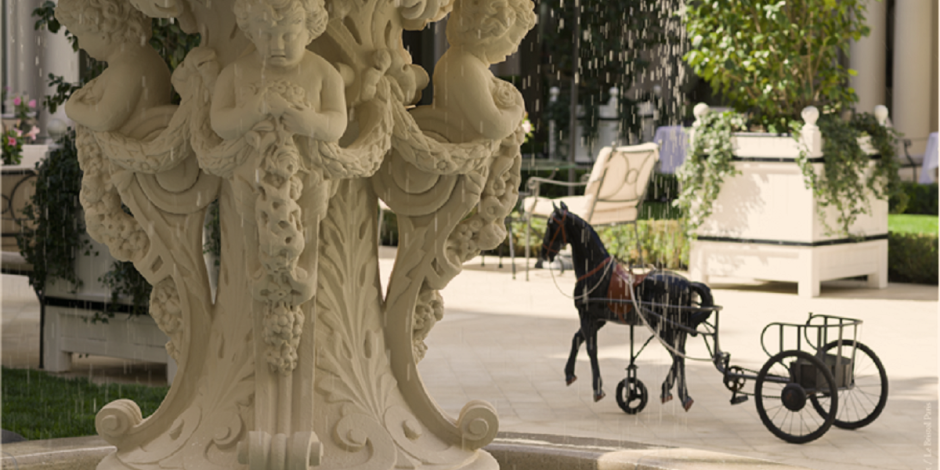 Summer wouldn’t be Summer in Europe without a trip to Paris. The Seine sparkling in the mid-year sun, decadent three course breakfasts and wandering the Champs Elsysee with Le coeur ouvert à l’inconnu. August is a great time to visit as the typical Parisian leaves the city for at least two weeks of the month (four if they really mean it) to enjoy their yearly coastal or country holiday. The streets are much quieter and you can let l’espirit Francais wash over you without the pressure-cooker feeling of many global cities in tourist season.

Le Bristol, one of Paris’ most celebrated hotels was home for the long weekend, and what a home it made.

Catching the Eurostar from London St Pancras and heading to Gare du Nord is so stress free it’s a joy. We arrived in Paris after a Friday lunchtime train and it was seamless – the hotel a welcome welcome. The beauty is that there’s almost no difference in-between spinning between meetings in London and catching the Eurostar: it’s easy to get to, you jump on with little luggage, settle in quickly and can actually continue to work with ease – finishing off those last few end-of-week tasks that make a weekend away that much more enjoyable. That, or if you are more organised/feeling lazy (delete as appropriate), you can start enjoying your journey with a semi-decent glass of wine.

Le Bristol underwent a mammoth £120m refurbishment in 2010, lasting three years. It was a collaboration between hotel owner Maja Oetker and renowned designer Yves Roche – and the result is as opulent as it could tastefully be. 182 rooms, including 78 suits, make up the magnificent space on rue du Fabourg St Honore. Grand is an understatement. We settled in to a beautiful suite overlooking the sparkling lights on haute couture boutiques and felt like we’d landed in a timeless Wes Anderson short.

Éric Fréchon Head Chef at Le Bristol since 1999, holds 3 Michelin stars and in 2008 was awarded the prestigious French Legion d’Honneur for his culinary masterpieces. Famous dishes include stuffed macaroni with black truffle and artichoke and duck foie gras au gratin with ripened parmesan. The artichoke was a standout success – still reaching out and comforting days, nay weeks, after the event.

Drinking at Le Bristol continues in much the same fashion. Le Bar du Bristol exudes timeless elegance and you can while away a good few hours there. The atmosphere in the bar itself, which is closed off with thick silk curtains for greater intimacy, evokes old English clubs; with a wooden floor made from Versailles oak and magnificent panelling that is over 100 years old, made of natural pine from Esher in Surrey. Two bookcases flank the 19th century fireplace, which is made of marble from Sienna in Italy. Gravitas to say the least.

Every evening a huge mirror becomes a screen, which showcases work by some of the world’s finest artists – this nullified the guilt of not visiting enough of the city’s spectacular museums. The place is managed by Edgar Vaudeville and Maxime Hoerth, the Head Barman, who was named Best Barman and Craftsman in France in 2011. His own cocktail creations include Bristol Old Fashioned N°1 (winner) and Heartbreaker. Accompanied by exactly the right kind of DJ for the space, a perfect combination for a night of fun.

It’s not all food, drink and over-consumption though. In 2011 Le Bristol launched Spa Le Bristol by La Prairie. It comprises eight beauty treatment cabins, a Russian Wet Room with the first effusion shower in Paris, a Turkish Bath for women only, a double VIP suite, a fitness centre, children’s area and a hairdressing salon. It is set over three floors of the hotel, is bathed in natural light and opens out onto a beautiful indoor garden – a haven within a haven.  A welcoming water wall in the reception area invites guests to enter a timeless cocoon of wellbeing and beauty in typical French-style luxury.

Once you’re fed, watered and properly relaxed you may be (well it’s possible) inclined to burn off some of those calories. Le Bristol’s fully equipped fitness space offers personalised training programs and a stunning swimming pool dressed in teak and glass on the roof. The swimming pool is kept at a perfect 28°C and opens on to a vast sundeck overlooking Paris. Bathed in August sunlight on a Sunday afternoon it was hard to see a reason to leave.

Rooms at Le Bristol start at €950 per night. For more information visit www.lebristolparis.com