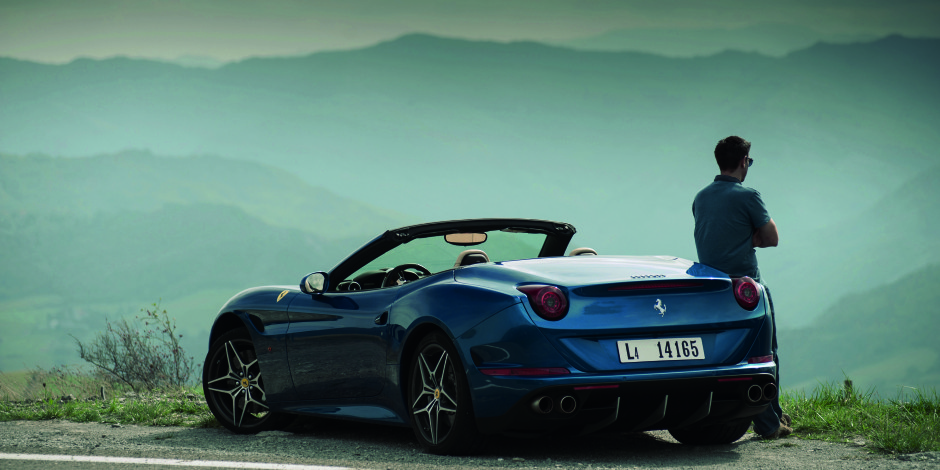 Ferrari Closer to the myth
Previous
Next

The first turbocharged Ferrari since the F40, the California T is set to pave the way for a new generation of smaller-capacity, forced-induction V8 models. Fearful that emissions legislation may have had its way with Italy’s most iconic car-maker, Jethro Bovingdon visits Ferrari’s spiritual home in Maranello to set the record straight, H.R. Owen-style.

There’s no bigger cliché but this place positively pulsates with history. You can see it, smell it and hear it. That’s no exaggeration. I’m peering through a gap torn in the fabric that lines the high fences around Fiorano and every minute or two catch a glimpse of a 250 LM. Yes, that 250 LM – the car that won the famous around the clock race in France in 1965. Its 3.3-litre V12 engine isn’t being fully wrung out but it sounds sensational and the air is thick with the smell of hot oil and brakes. These little viewing points are cut into the material every few yards. It’s not vandalism, more like reverence, the mark of a million fans who’ve made the trip to Maranello just to soak up the sights and sounds, to feel closer to the Ferrari myth. Today I’m one of them.

The street names – like the via Tazio Nuvolari or via Ascari – the imposing Ferrari museum and the famous old gates on via Nazionale Abetone tell of that history, but there’s an unmistakable sense that this place is alive, too. Beyond the old factory buildings there’s the sci-fi cylindrical shape of the new wind tunnel, heavily disguised prototypes bark conspicuously through the streets and traffic and people come and go in a constant stream. The art of the supercar and the science of F1 is progressing here and now. Being able to wander around while it’s all going on is, well, pretty cool. Driving the latest beneficiary of that fast-paced evolution is even better. We’re here not only to soak up the atmosphere but also drive the new California T, Ferrari’s first turbocharged road car since the F40. No pressure…

But let’s rewind to the moment that flight BA0542 touched down at Bologna airport, because there’s visiting Ferrari, then there’s doing it the H.R. Owen way. Sadly we don’t have Owen Rothwell with us. Rothwell is H.R. Owen’s Marketing Manager, an incurable Ferrari enthusiast and after countless factory visits with clients, a mine of information on this region. With the new California T to drive and photograph we can’t follow his recommendations to the letter, nor take in the breathtaking factory tour that’s usually central to any visit, but we’ll try to cram in as much as possible and get a flavour of what makes this part of Italy so special. ‘Bologna is the country’s gastronomic capital…,’ Owen explained on the phone just before we set off. ‘… so I always like to explore the food, the incredible café culture in the city and the amazing generosity of the people.’

If you trust Owen (and you should), stay at the Grand Hotel Majestic ‘gia Baglioni’ in Bologna, just a few moments’ walk from the spectacular Piazza Maggiore and its iconic Fountain of Neptune. Sculpted in bronze by Flemish artist Giambologna, this monument, of course, inspired the trident badge worn proudly on Maseratis. It’s a magnet to tourists

but there are other jewels nearby that only the locals and Owen know about, like the Rodrigo restaurant on via Zecca. ‘The food and service is amazing. It’s just unmissable.’ says Owen. I get the feeling that the local Parma ham, tagliatelle Bolognese and a bottle of Ornellaia is just where the night begins. ‘Usually we pop into the Nu Lounge,’ Owen explains. ‘The owner Daniele Dalla Pola has become a great friend to us and, happily, he’s the “42 Below” cocktail world cup champion…’

An early start means we can’t enjoy the heart of Bologna into the night. Maranello is 45-minutes or so from the hotel and we have that California T waiting. It’s a fascinating car and I’m keen to discover if the switch to turbocharging is a matter of necessity in order to meet CO2 legislation, or something enthusiasts and owners can be genuinely excited about. There’s no arguing with the numbers – the T’s 3.8-litre twin-turbocharged V8 produces 560bhp at 7500rpm and up to 557lb ft at 4750rpm, emissions are down to 250g/km and fuel efficiency is improved 15-percent despite that 49-percent – yes, forty-nine – torque increase. Ferrari says the car does 0-62mph in 3.6-seconds and 196mph. Of course numbers alone can’t define an engine, especially a Ferrari engine, so we need to discover if the precision, response and the hallowed noise have been preserved, too.

I love nosing out of those famous gates in something special and rolling slowly around Maranello. First stop is that high fence with the convenient viewing holes cut into the fabric screens behind it on via Goito. The Ferrari museum is on the adjoining via Dino Ferrari and well worth a few hours of your time, but again Owen has other recommendations. Like the Museo Enzo Ferrari and Umberto Panini Collection in Modena or, even better, the jaw-dropping Righini Collection that is almost impossible to get access to unless you’re a good friend of the owners. Owen can sort that, too. But for us the draw of the fabulous Futa and Raticosa Passes is too great to resist. If we were sticking around in Maranello we’d lunch at the fabulous Montana Restaurant, just as Ferrari staff and F1 drivers have for decades, but instead we’re heading for a little café called the Chalet Raticosa 100km or so from the factory. The food isn’t as spectacular but the Passes that lead there more than make up for it…

It’s a relief to immediately discover that the T sounds like it should. It barks triumphantly on start-up and a quick blast down the slip road onto the A1 autostrada reveals a rich howl that could only come from a Ferrari. There’s superb throttle response too, which is fiendishly complex to achieve with a turbocharged engine. So far, so good. What’s less familiar is the sheer thrust available in the low and mid ranges. The T feels searingly quick. Even better is the nature of the delivery. Ferrari has chosen to restrict the engine’s torque in the lower gears, giving the driver access to more step-by-step with each gear until the full 557lb ft is on tap in 7th. That might sound slightly odd but in practice it’s seamless and also helps the California T to retain the character of a normally-aspirated engine. Simply put, it aids traction and creates a delivery that builds progressively to a scintillating top-end rush – a tradition that is at the very heart of any Ferrari’s character.

By the time we reach the foot of the Futa pass, I’m pretty much sold on the new engine and, of course, the 7-speed dual-clutch F1 gearbox allows such fine control that the California T feels completely intuitive. It feels like the consummate GT. As the road

bunches up and climbs high into the Tuscan-Emilian Apennines I’m hoping it’ll morph into a true sportscar, too. Lowering the roof so I can hear the V8 bouncing off the stone walls and echoing around the hills, it’s time to find out.

The CCM3 carbon-ceramic brakes certainly shrug off the demands of the repeated hairpins and the SCM3 magnetorheological dampers offer accuracy and excellent control. Of course it doesn’t have the sharpness of a 458 Speciale but the California T’s ability to play the dual role of everyday GT and thrilling sportscar is convincingly demonstrated up here. Refreshingly, the locals who hear the charging Ferrari coming greet it with a cheery wave as it ambles slowly through the many small villages dotted up the hillside. This is supercar country not just because of the incredible roads and the history, but because the people understand and appreciate these cars and don’t mind showing it.

There’s a warm reception for the California T from the bikers gathered at the Chalet Raticosa, too. It might represent a new chapter for Ferrari with the return to turbocharging, but the old charisma is still writ large in its DNA. I’m hugely impressed with the drivetrain: It remains super-sharp and responsive, revs cleanly and with energy right to the limiter and yet offers a quite phenomenal spread of performance. That the chassis soaks up the power and transmits it so effortlessly is equally impressive. If the future for Ferrari is turbocharged, and it looks like it is for the V8 cars, then we might just be in for a treat. Now, for a bowl of pasta and the return leg down the Futa Pass…