The Presidential Suite of The Surrey Hotel, Upper East Side, Manhattan

HedgeBrunch landed in the US at the beginning of December to host its inaugural stateside event. Offering the most concentrated grouping of hedge funds in the world New York was abuzz for the occasion on Manhattan’s glamorous and moneyed Upper East Side. The Presidential Suite of The Surrey Hotel played host for the evening- and with rooftop views across Central Park and the city, Michelin starred catering and free-flowing drinks, it did not disappoint.

100 of Manhattan’s finest hedgies joined us for the evening – networking in imitable HedgeBrunch style and excited to be part of the first US event. Founding HB supporters Murano Connect and Peregrine Communications were in fast support – having both launched their US offices in late 2014 they are making quite the impact already. Max Hilton, US Head of Peregrine Communications commented “We’re very excited to be in New York with HedgeBrunch, we’ve been at every event around the world so far so there was no way we we’re missing this one! As ever it’s a unique occasion where we see real value in getting to know people at a personal level”.

A rich spectrum of US based alternatives professionals were in attendance and all noted the difference in comparison with the standard hedge fund event. One Family Office investor went so far as to say “We sit through enough panel discussion and pitch decks, it’s phenomenal to connect with the people behind the investment ideas and actually get to know them. This event has been so different and so much fun with great people too. Brilliant minds, perfectly tailored suits, it’s the pinnacle of human evolution!”. Praise Indeed!

Host, Founder and CEO of HedgeBrunch, Gus Morison, took the time to speak to the assembled guests, welcoming them to the 10,000+ global community and explaining about the group’s philosophies. He also went on to give a teaser of the plans for 2015, which include further events in New York, Miami, Chicago, Monaco and Ibiza (as well as the original London and Swiss events), which created more than a frisson of excitement amongst the assembled guests.

The Surrey Hotel team were consummate in their service and, in comparison to some of the stuffier hotels in NYC, they have managed to combine serious luxury with an understated yet super-stylish vibe throughout. The member’s only roof terrace is now a firm HedgeBrunch favourite and we’ll be found there whenever in town from now on!

The evening was received incredibly well and, as is so often the way with HedgeBrunch events, guests were reluctant to leave the occasion, so there was a swift move to The Surrey equally luxurious cocktail bar. Whilst London can claim to serve some of the best cocktails in the world these days, there are some things our American cousins do well – and this bar’s offerings were testament to that.

A sold-out event, a stellar and sparkling crowd and new connections for all. HedgeBrunch will be back in NYC much more in the future. Have no fear.

To hear more about these events please sign up here. 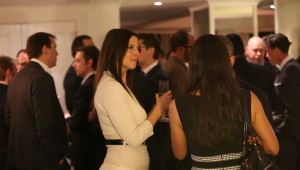