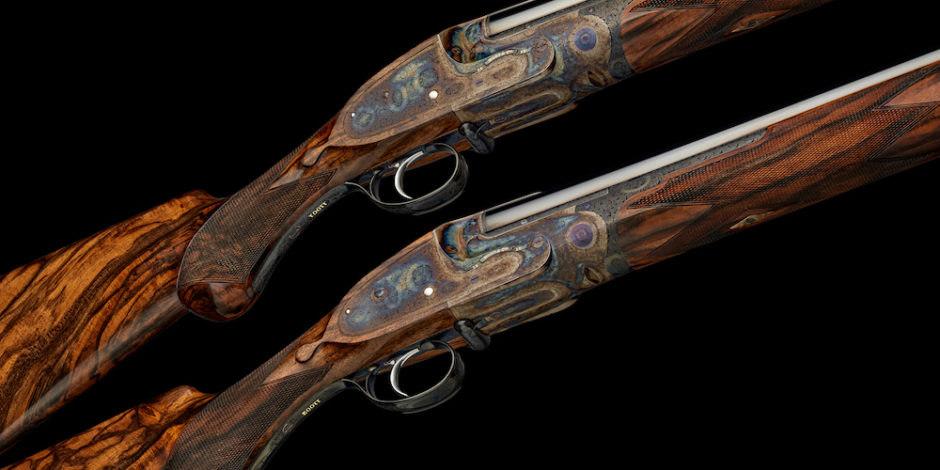 Boss & Co, London’s oldest gunmaker, has announced its new ‘1812 Edition’, introducing an innovation that has never been seen in gunmaking before. The result of four-plus years and the development of a purpose-built action, it’s Boss & Co’s first ever side-lever over-and-under gun, and the world’s first to include two side-levers in the presentation case. Uniquely, this allows the gun to be changed and adapted for a left or a right-handed shooter.

The new bespoke gun takes Boss & Co’s iconic O/U shape, arguably the most copied in the world – and regularly praised for its elegance – and introduces a new purpose-built action, incorporating a side lever rather than a top lever. Uniquely, another side lever for the opposite side of the gun is handmade and engraved at the same time to be included in the presentation case. This eliminates the challenge of a left-handed shooter inheriting his right-handed grandparent’s or parent’s guns and having to request a new lever be made and engraved. This also eliminates the possibility of the gun’s original engraver having since retired or passed on. 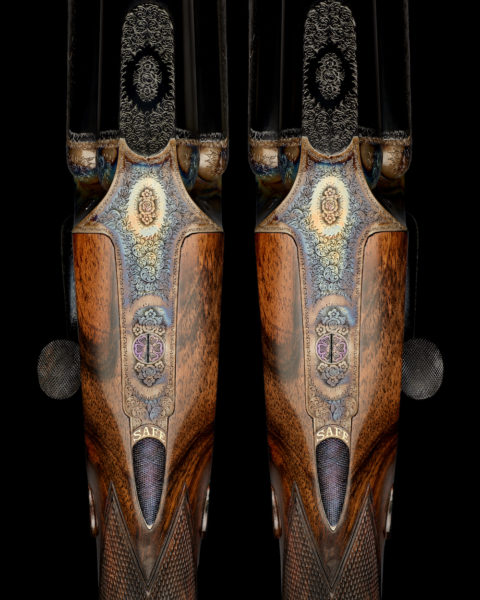 What’s more, all top lever guns traditionally open one way (with very few exceptions made years ago specifically for left-handed shooters) and all previous side lever guns have had the lever mounted on the right side of the gun, again with a very rare exception. That means there has never truly been a gun that works for both ‘lefties’ and for ’righties’. The ‘1812 Edition’ is finally that gun.

The company has spent the last four-plus years developing this innovative new firearm; the first that is both truly for right-handed and left-handed shooters

Inspiration for this gun came over four years ago as Boss & Co Owner Arthur DeMoulas was shooting with a pair of vintage Boss & Co side-by-side side-levers, and was struck by the ease-of-use and practicality of the layout in the field. With the knowledge that Boss & Co had, 20 years ago, created a prototype O/U side-lever gun, Arthur communicated with one of the company’s most experienced gunmakers, John Varney, along with others in the business to progress the idea of a bespoke O/U side-lever gun.

Over months, Arthur developed plans with the factory manager and the gunmakers for their insight into how this gun could possibly be created. It was a collaborative effort, guided by Arthur’s vision, that required the input and insight of every stage of the gunmaking process. A bespoke action would have to be created, which would require adapted barrels, stock, finishing, engraving and more. This wasn’t just an adapted top lever gun, it had to be all-new.

Sadly, shortly after the gun’s conception John passed away following 42 years with Boss & Co, but his enthusiasm and technical knowledge were the catalyst for this new gun, which is dedicated to his memory. Jason Craddock, who worked on the bench next to John for nearly 20 years learned from his experience and became an integral part of the project, as the whole Boss & Co team took on the challenge of taking that first prototype gun, and making it truly great. The result of their think-tank mentality – just as it has always been at Boss – was the world’s first truly ambidextrous shotgun, developed over four years with a purpose-built action and turned into a reality in nearly 2,000 man hours.

Boss & Co’s strapline for over two centuries has been ‘Builders of Best Guns Only’, and is focused on producing only the highest standard of guns and rifles by hand

The process of turning the gun from concept into reality required a look back into Boss & Co’s past, during which the company had produced hundreds of side-lever guns but only on side-by-sides (with the rare exception), with all the levers fitted on the right-hand-side. Boss & Co’s team drew inspiration from the elegant designs of these guns, replicating and modernising the side lever and shape for the ‘1812 Edition’. This delicate process of creation, with an entirely new type of gun, required the finesse and experience of all the craftsmen at Boss & Co: stocker, actioner, barrel maker, engraver and finisher. 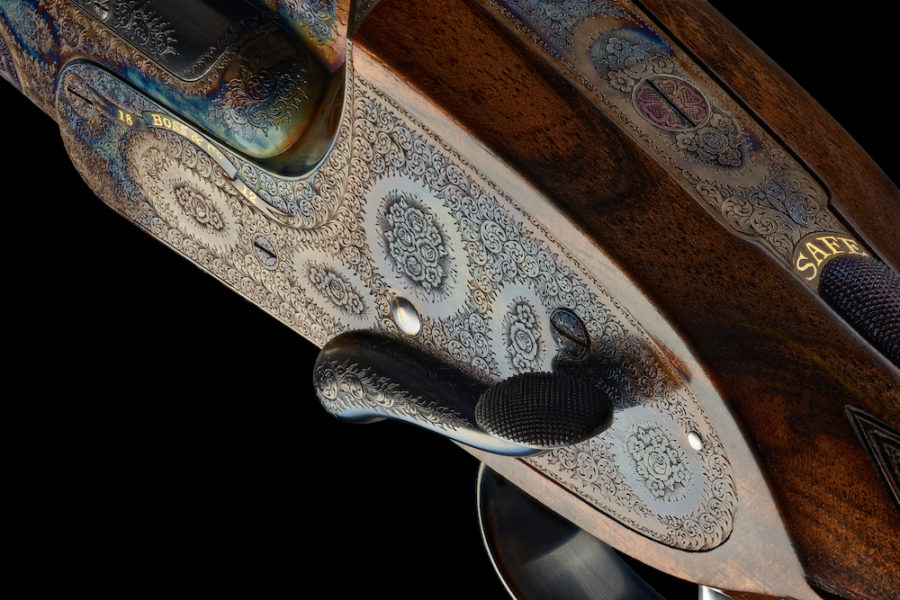 The new side lever itself is a thing of beauty. The hand-engraved chequered thumb push at the top is angled slightly forwards so that when depressed it is parallel with the action to stop the thumb slipping off. The lever curves gracefully around the action and such is the standard of Boss craftsmanship, if the gun is held up to the daylight, no light is visible between the lever and the action. A great deal of design also went into the vacant top strap now devoid of top lever. Not a single part of it is flat, creating a traditional Boss & Co flowing shape, as it tapers into a hand-engraved beetle-back safety – again a traditional design from London’s oldest gunmaker. The top strap, and the entirety of the body, has been engraved by Boss & Co’s engraver, Christophe, with the firm’s celebrated Rose & Scroll pattern. The ‘1812 Edition’ can be further personalised to any customer’s desire, with the largest selection of shapes and styles in the gunmaking industry.

In another first for British gunmaking, Boss & Co’s innovative new ‘1812 Edition’ – the world’s first ambidextrous over and under shotgun – will be delivered in a modern carbon fibre presentation case. Clothed within a subtle fabric outer layer finished with a handstitched leather border, the carbon fibre case is both lightweight and extremely strong.

Just as with the gun that it holds, the case is beautiful in both form and function. The carbon fibre weave – traditionally found in top-end performance applications – is perfect in its symmetry and its design. Upon opening the case, owners are presented with a beautiful wooden oak border and traditional Boss & Co Baze Red interior, fitted with traditional tools and accessories. The new case follows the overarching premise at the heart of the ‘1812 Edition’; that it is guided by tradition, not bound by it. It has all the inherent beauty and craftsmanship of  one of the intricate wooden cases designed and built by Boss & Co’s casemakers since 1812, but making use of the very latest materials and techniques.

Arthur DeMoulas, Boss & Co Owner, said: “As this project developed, one of our gunmakers, Jason, said: ‘Boss, guided by tradition, not bound by it’ and the 1812 Edition is the perfect example of that. It’s inspired by our past but it’s very functional and practical, and its ease-of-use in the field is now available to all shooters – regardless of which side they shoot on – in a way that no other gunmaker has done before. We’ve also found that for female shooters, with slightly smaller hands, the side lever is an infinitely more practical solution. This is entirely a Boss & Co gun, marked out by its elegant shape and timeless design, and built by hand to the very highest standards by some of the most gifted craftsmen in the world.
“We see this as a pivotal moment not just in our history, but in the history of gunmaking. Just as John Robertson revolutionised the world of firearms over 100 years ago during his time with Boss & Co, we believe the company and our talented gunmakers are doing something similar here, establishing Boss & Co’s name at the very top of the gunmaking world for decades to come.”

The company has been known for its innovations, perfecting the ‘Boss Single Trigger’, the ‘Boss Hammerless Ejector’, the first round-body side-by-side, and for producing what has been widely recognised as the most beautiful O/U gun in the world

Boss & Co is famed for introducing innovations to the gunmaking world that go on to become commonplace. The Boss Single Trigger, introduced in 1893 by John Robertson, was the first truly reliable single trigger mechanism, showcased to the public and press with a special side-by-side-by-side three-barrel shotgun operated from one single trigger. In 1897, Robertson then invented the Boss Hammerless Ejector, which has been in continuous production, virtually unaltered, since that day. And in 1909, Robertson invented Boss & Co’s over-and-under – the first British O/U – creating a gun that is regularly described as the most beautiful O/U in the world, or sometimes referred to as the racehorse of Best Guns for its wonderful lines.

This dedication to beauty and craftsmanship in building ‘Best Guns Only’ has led to Boss & Co becoming known as “the gunmakers’ gunmaker”. Most gun builders, if they could have any gun in the world, would choose a Boss. The company’s ethos is summed up perfectly by a Boss & Co sales brochure from the 1920s that read:

“We would say from the outset that we make only one grade of gun and have never placed a second quality make upon the market. This policy has enabled us to retain the services of the finest workmen in London, and to give them continuous employment. The advantages attending the production of best work only are manifold. There is no opportunity for the work of inferior men to be utilised in the economy of the workshop, which is frequently the case when more than one class of weapon is produced.

“The owner of a Boss gun has the satisfaction of knowing that he has the best gun that money can buy, and that no-one has a better. The Boss gun has, therefore, always a standard value, whether new or second hand. Our output is limited strictly according to the amount of first class labour available.”

AYU Members currently receive 20% off at The Royal Berkshire Shooting School, to join AYU and redeem this offer click here